25 May The Walters Way: The High Road to Success 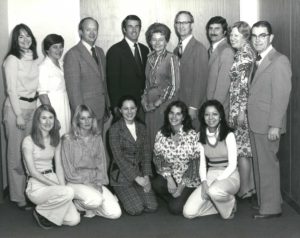 As Walters Management celebrates its 45th anniversary, President Joe Farinelli and Chairman John Alioto look back through the years at where they’ve been, and towards the road ahead at where they’re going.

In 1973, John Alioto partnered with Bill Borsari to open the San Diego office of The William Walters Company, a Los Angeles based property management company, after obtaining properties from a major financial corporation that went into bankruptcy. They began with the management of apartment complexes, commercial properties, and mobile home parks. During this time, condominiums became more popular and were added to their portfolio by way of new business and converted apartments. The duo then purchased the San Diego office from William Walters Jr. in 1986, and The William Walters Company became The Walters Management Company.

For the next decade, the company’s management portfolio expanded to include a wide range of property assets from master planned communities and planned residential developments to condominiums, apartments, and mobile home parks. In the pursuit of new management opportunities and in order to better serve their Inland Empire clients, a second office was opened in Temecula in 1994. Today, the Temecula office manages a robust portfolio of communities with a combined total of over 14,000 homes in associations ranging from 86 to 2,300 units.

As time went on, they realized that specialization in the community association industry would maximize their ability to achieve the goals and objectives of each association they served. Emphasis was placed on managed growth and streamlined business practices, and in 1996, they sold off their apartment management portfolio. “Getting out of investment properties has been one of the keys to our success,” said John Alioto. “This allowed us to focus all of our attention on HOA service.” The decades that followed have been spent sharpening their community association management expertise in order to provide second-to-none customer service. 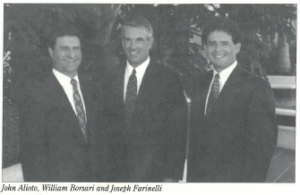 The company’s 25th year was one of considerable change, as Executive Vice President Joe Farinelli was named President and partner of The Walters Management Company in his 14th year. The new corporate structure had Borsari as Chairman Emeritus and Alioto as Chairman of the Board. Bill would officially part ways with Walters Management in ’02, remaining active in an advisory role for some time, after spending nearly 3 decades as an executive.

In the fall of 2002 Walters Management opened a third office in Chula Vista to satisfy the needs of a growing portfolio. Just two years later in 2004, the fourth office opened in Carlsbad – completing Walters Management coverage of the greater San Diego area. Senior Vice Presidents Barry Burzo and Melinda Young are responsible for new business development, client retention and general operations of the four offices, with Barry managing Carlsbad and Murrieta, and Melinda managing San Diego and Chula Vista. The Senior Vice President team also includes Bill Beasley, who joined in 2010 and has been responsible for the accounting department and has implemented a comprehensive online property management software system. This group has been instrumental in the company’s ability to maintain a high level of excellence during a time of significant expansion.

For 20 years now, Walters Management has continued to enjoy steadily managed growth and developed a rich corporate culture under the leadership of President Joe Farinelli. “Maintaining a healthy corporate culture has meant not working from the bottom line, up,” said Farinelli. “We understand the long term value of taking care of our people.”

John Alioto joins Farinelli at the helm as Chairman of the Board and brings with him more than 40 years of experience in the property management industry. His business relations expertise has contributed greatly to Walters Management’s longevity in relationships with both clients and employees. “We place great emphasis on the personal aspect of doing business,” said John Alioto, “which means providing a high level of service while treating clients, vendors, and employees with the same degree of respect that we expect for ourselves.” This code of ethics has been instilled within each facet of Walters Management business operations and is a part of what’s known as the “Walters Way.” As a result, many employees have been with the company for over 15 years.

Together Joe and John run a business that oversees nearly 150 community associations, many of which are master-planned communities with up to 3,800 units. Continuity has been a consistent theme for the company, which is reflected by 20 respective clients that have been with them for over 20 years. Having multiplied their community association portfolio by two and a half times since the turn of the century, Walters Management has taken their founding principles and applied them to a new era.

Tried-and-True Principles for a New Era

“Survival, growth, and perpetuation” was the driving force behind Bill Borsari’s planning and operation of The Walters Management Company during his 25 year tenure as president. While the sentiment still rings true after 45 years, these words carry a new meaning when spoken by current president Joe Farinelli.

Survival is about ensuring that their steadfast commitment to the “Walters Way” lives on through an ever-changing cultural climate. Maintaining the corporate culture with which they have secured thriving business relationships and world-class employee retention has meant remaining selective in business opportunities. This has guaranteed excellence in the level of service provided. Growth is carefully cultivated and pruned to uphold the highest standard of customer service while giving both clients and employees the best possible opportunity to be successful. The perpetuation of core principles must now be balanced with a cultural evolution that allows Walters Management to remain an industry leader in a world where business and technology are inextricably linked and evolving faster than ever.

Industry leadership is a standard for Walters Management. Joe Farinelli has been a leader in the community and property management industry for more than 30 years. His commitment to improving the industry has been recognized numerous times by the San Diego Chapter of Community Associations Institute (CAI) as he has been the recipient of its 2005 Recruiter of the Year Award, 2002 President’s Award and 2000 Speaker of the Year Award. He has also served on the national faculty for CAI. John Alioto is the past president of the Institute of Real Estate Management (IREM), San Diego Chapter, and was awarded the Lifetime Achievement Award by the San Diego County Apartment Association and the Distinguished Presidential Award by IREM for outstanding service and leadership to the industry. Walters Management staff has followed this tradition through constant participation on CAI Committees, the CAI San Diego Chapter Board of Directors, CACM Faculty, and the CACM Board.

Walters Management’s service to the community extends beyond the property management industry, with regular sponsorships of local schools, youth sports teams, libraries, community groups, and non-profit organizations. Their local presence allows them to understand and respond to the unique needs of the communities which they serve.

When looking at the road ahead, Farinelli makes it clear that he has no intention of changing the ownership structure. “We need to focus on maintaining the culture here at Walters. When you merge with or sell to a large national company, lose the culture, and that would have a detrimental affect on the level of service we’re able to provide our communities.” Other priorities include capitalizing on the Inland Empire market and taking advantage of new technologies that allow for more efficient models of communication. A strong digital presence and integrated communication systems will improve customer service efficiency and boost relations with homeowners.

While these aspirations are undoubtedly a priority, the underlying goal remains the same: uphold a high level of excellence in customer service, operate with integrity, and maintain their commitment to the “Walters Way.”